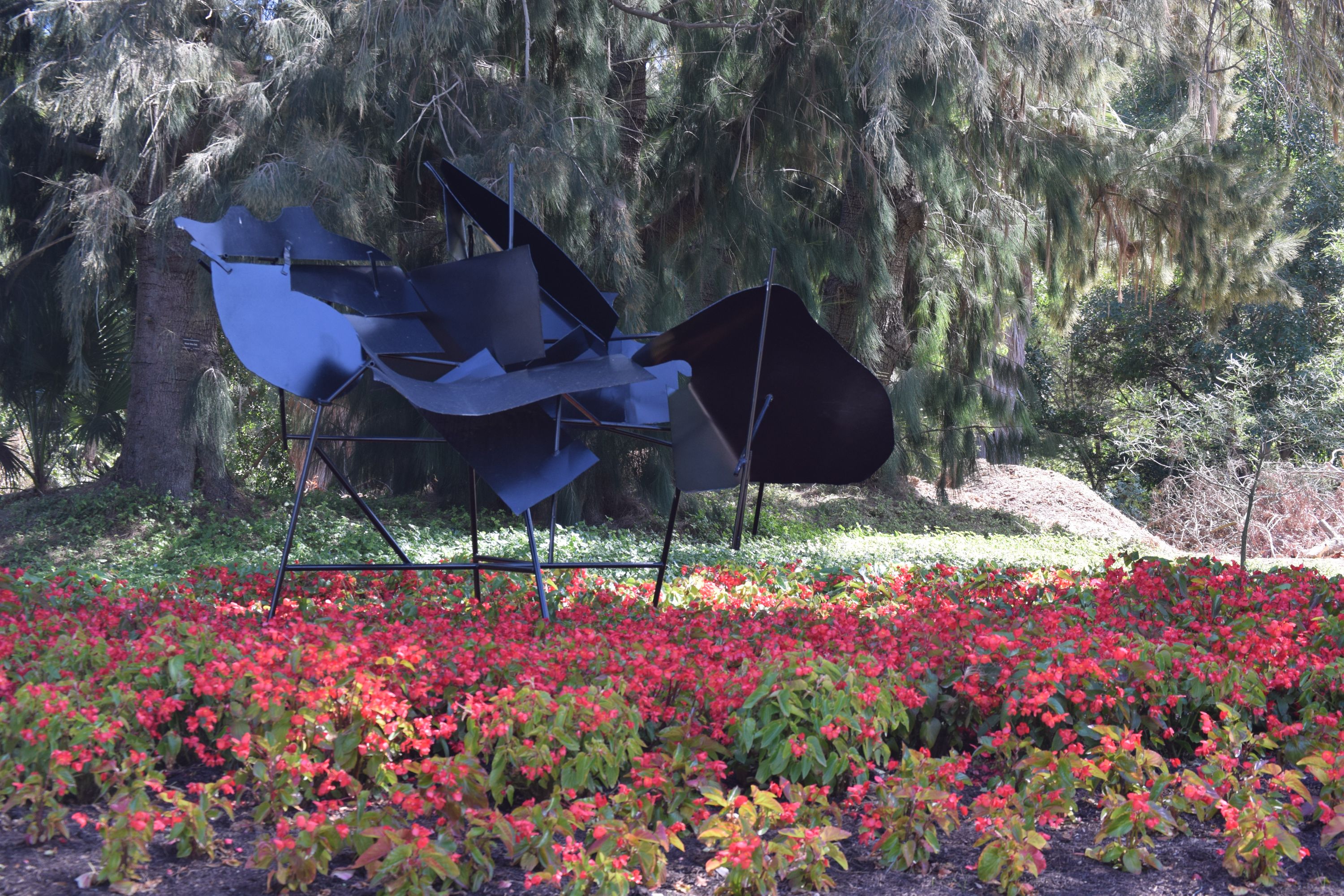 “The Duchess of Alba,” by Reuben Nakian, in She-Oak Meadow. Photo by Bondo Wyszpolski

With 87 acres of forest and meadow, flower fields and winding paths, a lot of really big things can be tucked away on the grounds of the South Coast Botanic Gardens. Danielle Lacharite Brown cranks up the engine of the electric cart, and away we go, in search of the eight sculptures that comprise “Hide and Seek,” six of them on long-term loan from LACMA and now joining the two previously installed. 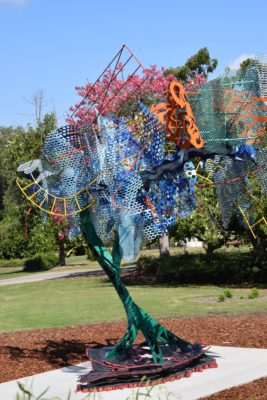 Brown is the Garden’s Chief Development Officer, but just because she’s an “officer” doesn’t mean she’s carrying handcuffs and a baton. What she is 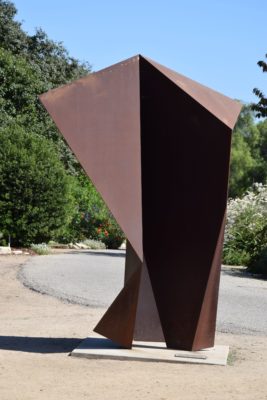 “Soller I,” by Betty Gold, in the Volunteer Garden. Photo by Bondo Wyszpolski

carrying is a great deal of knowledge about these dinosaur-sized works of art that we’re on the lookout for.

The first one, crouching down near the Mediterranean Garden, is Doris Sung’s “Fuller.” The piece resembles a giant kid’s ball that has rolled in from somewhere, or else dropped down from the heavens. It’s made of thermal bimetal, which means that it’s responsive to the heat of the sun and can expand when it’s warm and contract when it isn’t. Not surprisingly, “Fuller” is a nod to Buckminster Fuller, who popularized the geodesic dome.

In the late 1990s, Brown worked at LACMA, and so she was enthusiastic when the museum put out feelers with regards to finding vacation spots for some of its larger-than-life treasures. “I was excited,” she says, as the cart pushes along at eight or nine miles an hour, “because I knew the collection.” Her reply, when LACMA officials queried her, was “How many can we take?”

We pull off the beaten path and Brown cuts the engine a few yards away from “Firestone,” a grayish sculpture by Peter Voulkos, who’s better known for his colossal ceramics. This one calls to mind the Purism of painters Fernand Léger and Amédée Ozenfant, as well as the Cubism of Georges Braque and Juan Gris. It had been on view at LACMA near the La Brea Tar Pits.

“What’s exciting to me,” Brown says, “is how different it looks here than it did there.” Before, the work was in the shade with too much company. “Here it has all of this room to breathe.”

Contrary to what its title may suggest, “Firestone” isn’t made out of old tires but rather various metal parts from a shipyard.

We head over to the south end of Phoebe’s Meadow where the colorful tree-like “Trace” by Nancy Graves stands proud, seemingly holding court among its arboreal neighbors. Although constructed out of various metals, it has a sensual swimming pool-green trunk and a whirlwind of foliage in light blues, orange, green, red and orange: a big burst of arrested energy. The inspiration for the piece, according to Brown, comes from Graves’ travels and the beauty of nature she encountered.

On the other end of the meadow and across the tram road that bisects it, is Richard Artschwager’s “One on One.” From a distant, this is somewhat reminiscent of National Socialist architecture, blunt and solid, and rather severe. But on closer inspection it resembles a table with seats on both sides. For Brown, “it suggests a meeting taking place between two people,” which remains conceptual until people actually climb up, sit down, and order off the menu. However, that’s not the milieu that Brown envisions. 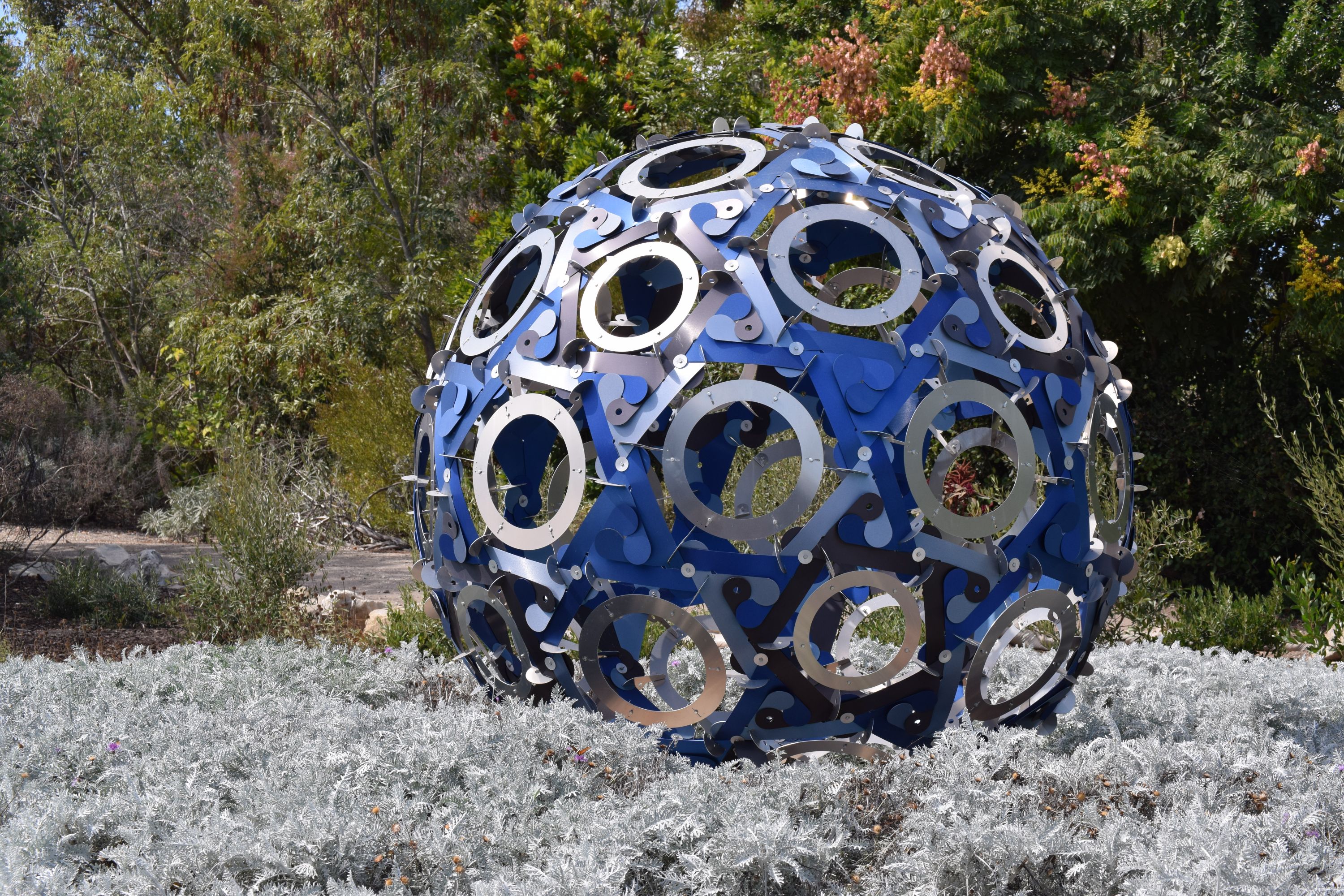 “Fuller,” by Doris Sung, in the Mediterranean Garden. Photo by Bondo Wyszpolski

“We’re launching this conversation between art and nature,” she says, “and so with this piece we thought it would be fun to build a conference room out of these Italian cypress trees.” Indeed, there are four rows of fledgling trees, laid out in a square surrounding Artschwager’s work. “They’ll grow a couple of feet a year and they’ll grow wide,” Brown continues, “and eventually the sculpture will be completely obscured by the plantings.”

She fires up the engine and motors over to “The Duchess of Alba,” which apparently was inspired by Francisco de Goya’s relationship, intimate or otherwise, with the 18th century noblewoman whom he painted dressed and undressed. Sculptor Reuben Nakian apparently enjoys salacious titles or inferents, since some of his other works go by the name of “Leda and the Swan” and “The Rape of Lucrece.” For all that, the piece is completely abstract with little to suggest desire under the elms or splendor in the grass. 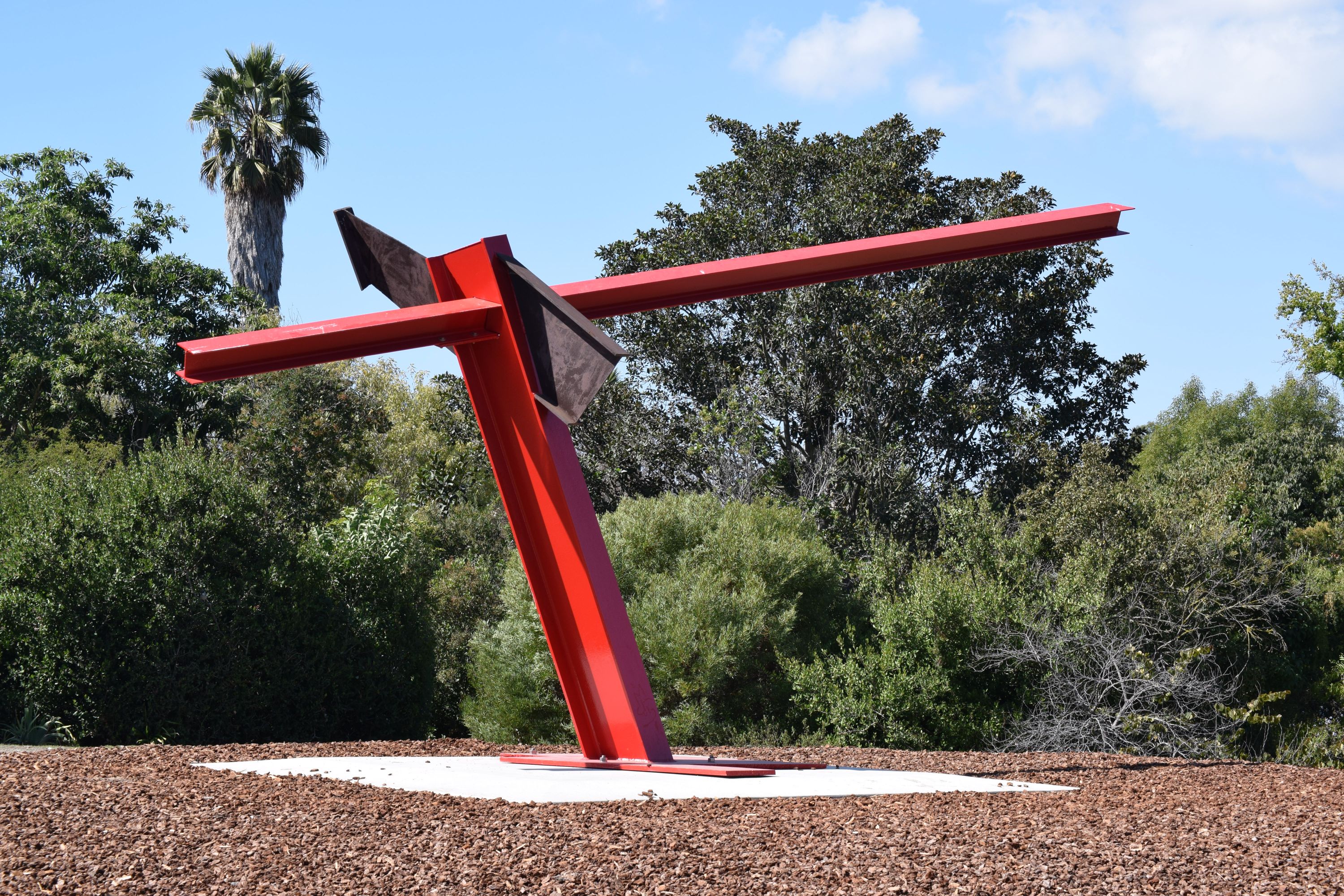 “When I was at LACMA,” Brown says, “this was on view at the plaza. I knew it was meant to be kinetic,” but it never moved. “Out here, on a perch, it gets some wind. So, when we installed it, curator Leah Lehmbeck said, ‘We’ve given the Tin Man a heart!’” True, it slowly extends and retracts its spider-like arms, but don’t you think it’s more likely to invoke memories of “Alien” than “The Wizard of Oz”?

Memorial Meadow is spacious and green, perfect for golf and tackle football, which I imagine aren’t allowed. Instead, it’s being guarded by Mark di Suvero’s “Teha,” one of his trademark industrial steel I-beam constructions, usually very simple in design but not so easy to erect since di Suvero’s tools of choice are the crane and the cherry picker, not to mention an assortment of welding torches.

“This is probably the largest in size,” Brown says, referring to the Garden’s eight sculptures. “Not the heaviest; the Artschwager is the heaviest. We’ve positioned it facing north to see if we could play with it like a sundial.”

The last work on our circumferential tour is Betty Gold’s “Soller I,” which looks like one of Richard Serra’s offspring.

This gift to the Garden by Marilyn Long, says Brown, was the first work to be installed. “The work is Corten steel, and when [Gold] installed it it was a sort of shiny silver. She was excited to see the patina coming onto the sculpture as she had intended it.”

“Soller I” may have been inspired by origami and the artist seems to regard it as a dancer. If so, not the sort of dancer you’d want stepping on your toe.

Somehow, we’ve gotten back to the main entrance without encountering any bears, wolves, or highwaymen. Brown cruises to a halt and the adventure is over.

It’s an impressive array of sculpture, a complement of sorts to the more soulful European “follies” that grace various parks, public and private, with ruined temples, faux windmills, imitation pyramids and toppled obelisks, often with bronze or marble archers or discus and javelin throwers. The gardens are large and flourishing, and let’s hope we’ll see more additions to the collection in the years to come. 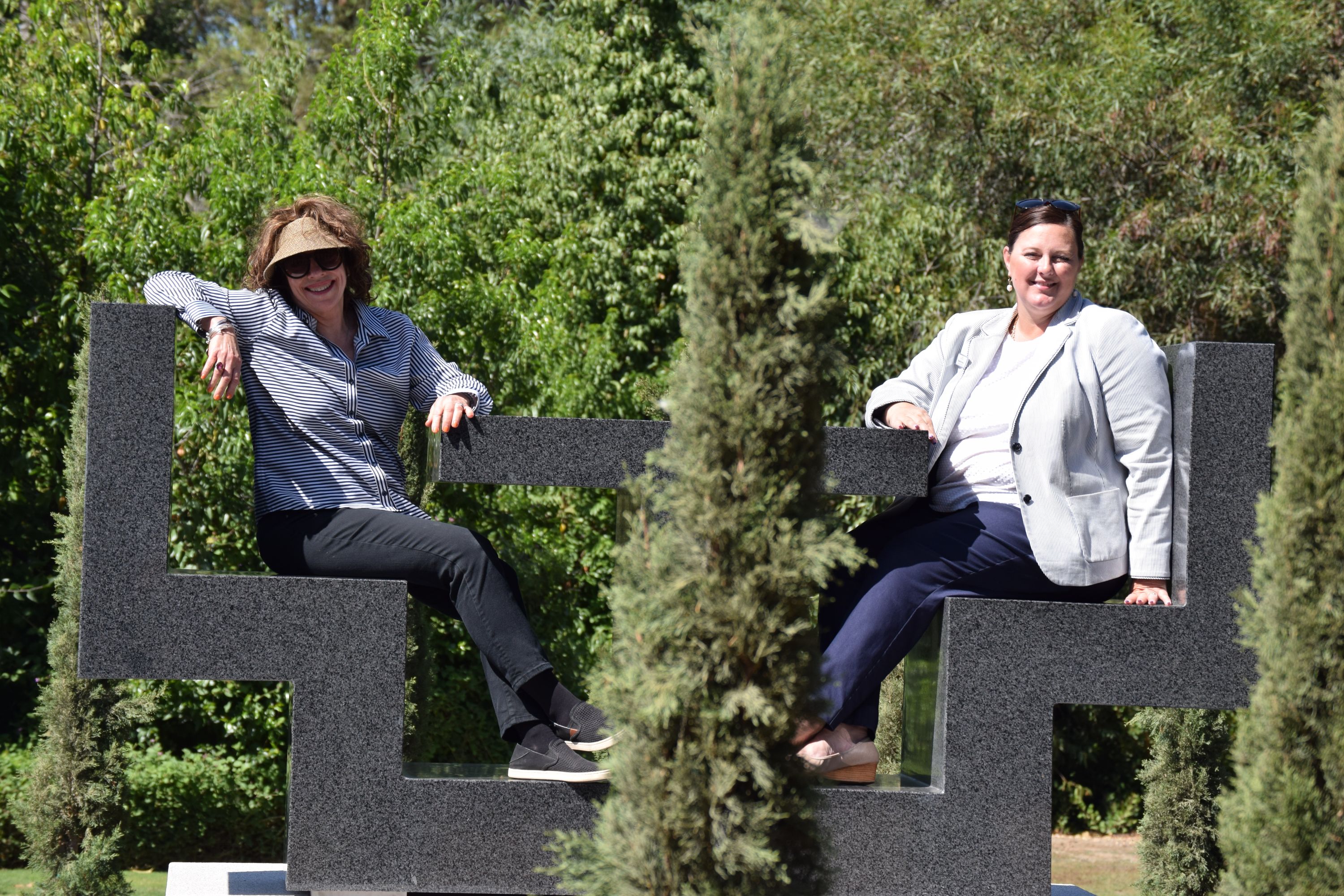 Debbie Giese, left, with Danielle Lacharite Brown, awaiting table service at Richard Artschwager’s “One on One,” in Phoebe’s Meadow. Photo by Bondo Wyszpolski

The South Coast Botanic Garden is located at 26300 Crenshaw Blvd, on the Palos Verdes Peninsula. Tickets, $9 adult; $6 seniors and students; $4 children; and free for toddlers. Memberships are available. Hours, 9 a.m. to 5 p.m. daily (except Christmas). Last ticket sold at 4:30. Call (310) 544-1948 or visit southcoastbotanicgarden.org.

In pictures: Annual Sculpture by the Sea art exhibition in Sydney – Gulf News

Child is killed at Christmas market in Luxembourg when ice sculpture...

Behind the Sculpture: ‘We Good Stewards”https://www.gjsentinel.com/” Entertainment