On a balmy November morning, in a backyard on a bungalow-lined street, stood a half dozen massive ice slabs.

Buddy the Viking took a drag off of a cigarette, looking back and forth between the frozen blocks — loosely clustered like a slowly melting Stonehenge — and a diagram of the Houston skyline. A second man, his beard in a braid, grabbed a chainsaw and headed for the freezer.

It was a scene that could only happen in Houston, with its freewheeling lack of zoning and love of the improbable. The backyard of the blue-and-tan house with a jet ski parked out front is the unlikely home of a booming ice carving business, DLG Ice Factory. Its owner, Rolando de la Garza, first encountered the art — which involves shaping frozen water with chainsaws, chisels, picks and propane torches — at a catering event in El Campo. 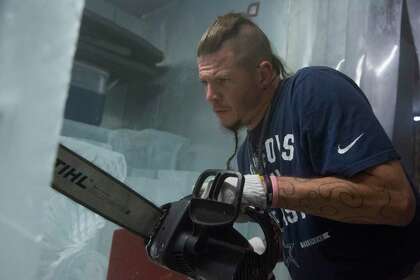 “It just changed my life,” de la Garza said, “I didn’t know they did that in Texas!” He pressed its sculptor, a Swiss master living in Montrose, to take him on as an apprentice. Now, de la Garza has made a name for himself as Reverend Butter, a carver who sculpts ice with the ease of molding dairy, and has received multiple World Ice Championship awards.

And on Thursday morning, his team was getting ready to show what they could do.

On HoustonChronicle.com: Houston kicks off Hanukkah with ice sculpture menorah

So much of the ice carving industry’s business falls over the holidays that DLG Ice Factory in Northeast Houston pulls a quarter of its revenue during span between mid-November and New Year’s Eve. A DLG Ice Factory sculpture made from a single 300-pound block of ice goes for around $425 and takes two to four hours to carve; an elaborate, multi-block work such as an ice bar commands as much as $20,000.

Another ice sculpture company, Ice Occasions in Conroe, generates 40 percent of its revenue during December alone. His prices start at $250.

“It’s a madhouse,” said Ice Occasions owner Andi Camacho of work during the busy season. “Because you’re just cutting 24/7. Sometimes I have to stay up all night to finish projects because the list is just so long.”

Last week, DLG Ice Factory was preparing 100 blocks of ice — 15 tons — for Frostival, a celebration of winter hosted by the Discovery Green Conservancy. Butter had called in two carvers, one from San Antonio and another from Philadelphia, to help fill the order.

Full-time employee Christopher “Bull Bad Company” Barnes dashed from the freezer to the workshop, grabbing various tools to add a company logo to a frozen bar. In the freezer, the air was fogged with cold. Visible through the mists gleamed fantastically plumed birds, a gorilla’s head and the pieces of a seven-foot space shuttle, each shining like polished crystal.

Outside, Buddy the Viking, from San Antonio, whose real name is Burr Rasmussen, readied to cut a block into the shape of 1100 Louisiana St. 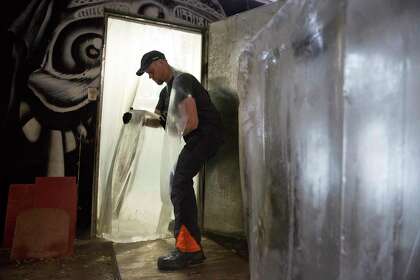 Like many in the industry, Buddy discovered you can make a living with ice while training to be a chef — some trace the roots of the art form to 1982, when French chef Auguste Escoffie carved an ice swan to hold a peach-and-ice cream dessert. Chefs today still use frozen sculptures to lend dishes pizzazz, and Houston’s other two carvers, Camacho and Don Henley of Ice Designs, were also introduced to the ice carving profession while working in hospitality.

Unlike many in the industry, Buddy grew up working ice.

“I was born in Iceland and my family bought a gold mine in Alaska when I was three,” he said. “We would pull ice in, carve it and use it for furniture.”

Texas Inc.: Get the best of business news sent directly to your inbox

Naturally frozen blocks of water, of course, are less readily available in Texas. DLG Ice Factory freezes its water in ice makers fitted with pumps. The water, kept in constant motion, has no chance to freeze around air bubbles that could cause clouding (the absence of air also makes ice heavier than the stuff from home freezers). In normal Texas weather, a 300-pound block takes four days for the machines to freeze; after a good cold front, it only takes two. DLG churns out 343 tons of ice a year. 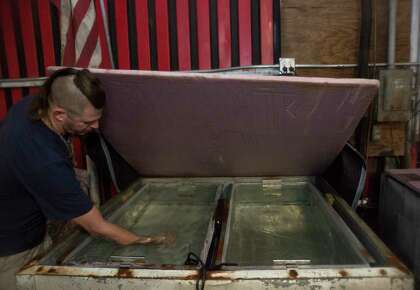 Preparing it all during the year-end crescendo of holiday parties and winter festivals means long hours, seven days a week.

DLG Ice Factory spends New Year’s Eves on the road. After racing around the Houston area delivering a rash of orders by midnight, Butter and his team pull over, pop champagne, and enjoy a brief lull before getting back to work. “At 2 a.m., we go back and tear everything down for safety,” he explained.

During the off-season, finding uses for the ice takes a little more creativity. Luckily, the same city that produced the world’s first air-conditioned stadium has been known to commission 60-foot ice bars for weddings in May and celebrate an outdoor Ice Fest in July.

DLG Ice Factory has worked hard to diversify the types of events it services. “Once we had a funeral in the morning, a strip club for lunch and then we were at Senator John Cornyn’s in the evening.” Butter said, clarifying, “The strip club was to deliver a booty luge. We weren’t just having lunch.” DLG also sells high-end ice cubes of its dense, clear ice for bars to use in whiskey; for $9 a cube, you can have your ice hand-monogrammed.

Camacho said that, outside the holidays, May is a busy time because of the Offshore Technology Conference, when many energy companies order ice sculptures.

“OTC tells me if it’s going to be a good year or a bad year,” he said. “Because if everything is good in oil, business will be good.”

But during the holiday season, Houston’s ice carvers were working at full steam. Buddy used a clothes iron to smooth out the stepped roofline of a frosty Enterprise Plaza building. Don Lowing of Philadelphia, tasked with carving out his own piece of the Houston skyline, revved up chainsaw with a grin.

“It’s getting ready to snow.” 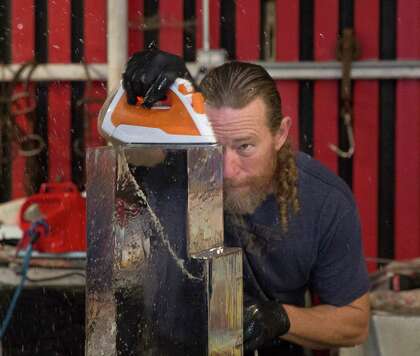 ‘Anything to say?’ Sculpture Dedicated to Assange, Other Whistleblowers Unveiled in Berlin – Video

Ofcom will not investigate Channel 4 over Tory ice sculpture complaint

Art Therapist Collects 14,000 Keys From Wildfire Victims and Transforms Them...

Gerdin sculpture restored to original state after weeks of work |...