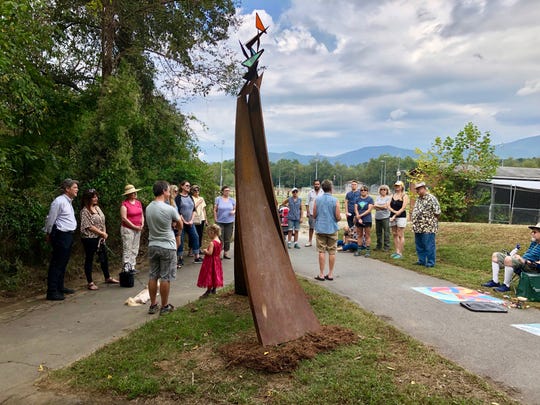 “An Exquisite Moment,” a sculpture by Julia Burr and Dana Gingras, was dedicated on the north side of Veterans Park on Sept. 28. (Photo: SPECIAL TO BMN)

A new art installation in Veterans Park was dedicated in Black Mountain’s Veterans Park on Sept. 28. The event, which featured the designers of the sculpture — Julia Burr and Dana Gingras — included the work of regional artists in the first annual Chalk the Walk.

Burr spoke to the crowd about her inspiration for the piece, which she named “An Exquisite Moment.”

The sculpture joins two previously installed works along various sections of the Black Mountain Greenway by the artist. Representatives from the Chaddick Foundation, which funded all three works of art through generous grants, were present for the dedication. 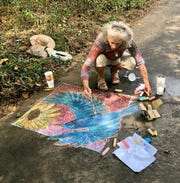 Libba Tracy puts the finishing touches on her chalk art during a dedication ceremony for a new sculpture in Veterans Park on Sept. 28. (Photo: SPECIAL TO BMN)

The sculpture, which sits on the north side of Veterans Park, is the second piece by Burr to be installed in the town-owned park. Her work, “The Alchemy of Dawn,” was dedicated last April on the south side of the park.

Burr’s sculpture, “Wild Things,” was dedicated on the Riverwalk Greenway in March of 2017.

Public art displays by Burr, a resident of Black Mountain, can be found in several highly visible areas outside of the town. Her work is featured in Pack Square, in downtown Asheville, and cities like Greensboro and Roanoke, Virginia.

All three of her Black Mountain Greenway pieces were supported by grants from the Chaddick Foundation. 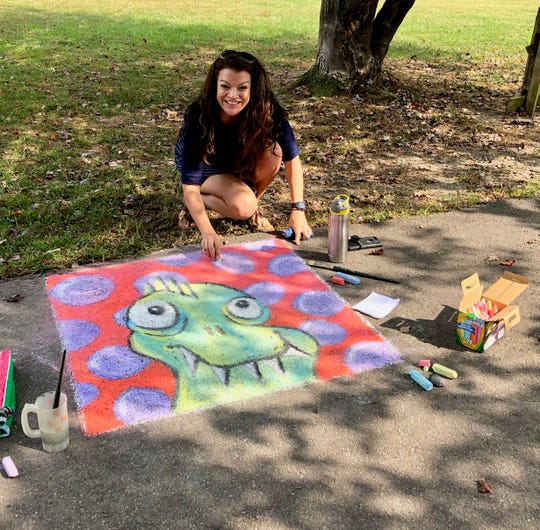 Owen High School art teacher Lacey Brown shows off her sidewalk chalk creation at Veterans Park on Sept. 28, during a dedication ceremony for a new sculpture by Julia Burr and Dana Gingras. (Photo: SPECIAL TO BMN)

Several temporary pieces of chalk art were created during the dedication of “An Exquisite Moment” on the pavement of the greenway.

In the News
Mumbai-based not-for-profit Jai Vakeel Foundation, which works for the management of individuals with intellectual disability (ID), by empowering their students, most of whom...