Sculptor News
Home In the News Fact Check: This hillside sculpture has nothing to do with drunk driving


An image of a giant sculpture of a baby inside a womb, carved out on a hillside along a road is getting viral on social media. The claim along with the image says the sculpture was carved by a man who lost his wife and unborn child to drunk driving.

Facebook page Check this out posted the image with the claim, Roadside sculpture carved by a father who lost his wife and unborn child to a drunk driver. This is incredible.

India Today Anti Fake News War Room (AFWA) has found that the original story behind the sculpture is not what it is being claimed with the viral image.

Till the filing of this story, this post has been shared more than 1,75,000 times. Though this post was made two years back, it is still going viral. The archived version of the post can be seen here.

To find the truth behind the viral image, we ran a reverse search and found that the sculpture is called Pregnant Mountain.

Situated just outside the town of Santo Domingo in Colombia, the sculpture was created in 2012 by artist Dubian Monsalve. He made this sculpture as part of his university degree work, which took him about 15 days to complete.

In an interview to a Spanish website, Monsalve said it is a tribute to the woman that gives life because life is valuable from its conception to its end.

We also found some other articles on this sculpture that tell the same story.

Therefore, it is clear that this sculpture was not made by a man who lost his wife and unborn child to drunk driving. 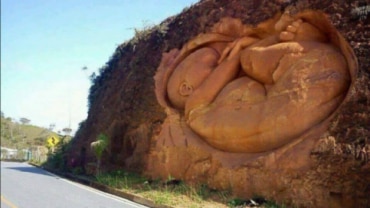 The number of crows determines the intensity of the lie.

If you have a story that looks suspicious, please share with us at factcheck@intoday.com or send us a message on the WhatsApp number 73 7000 7000