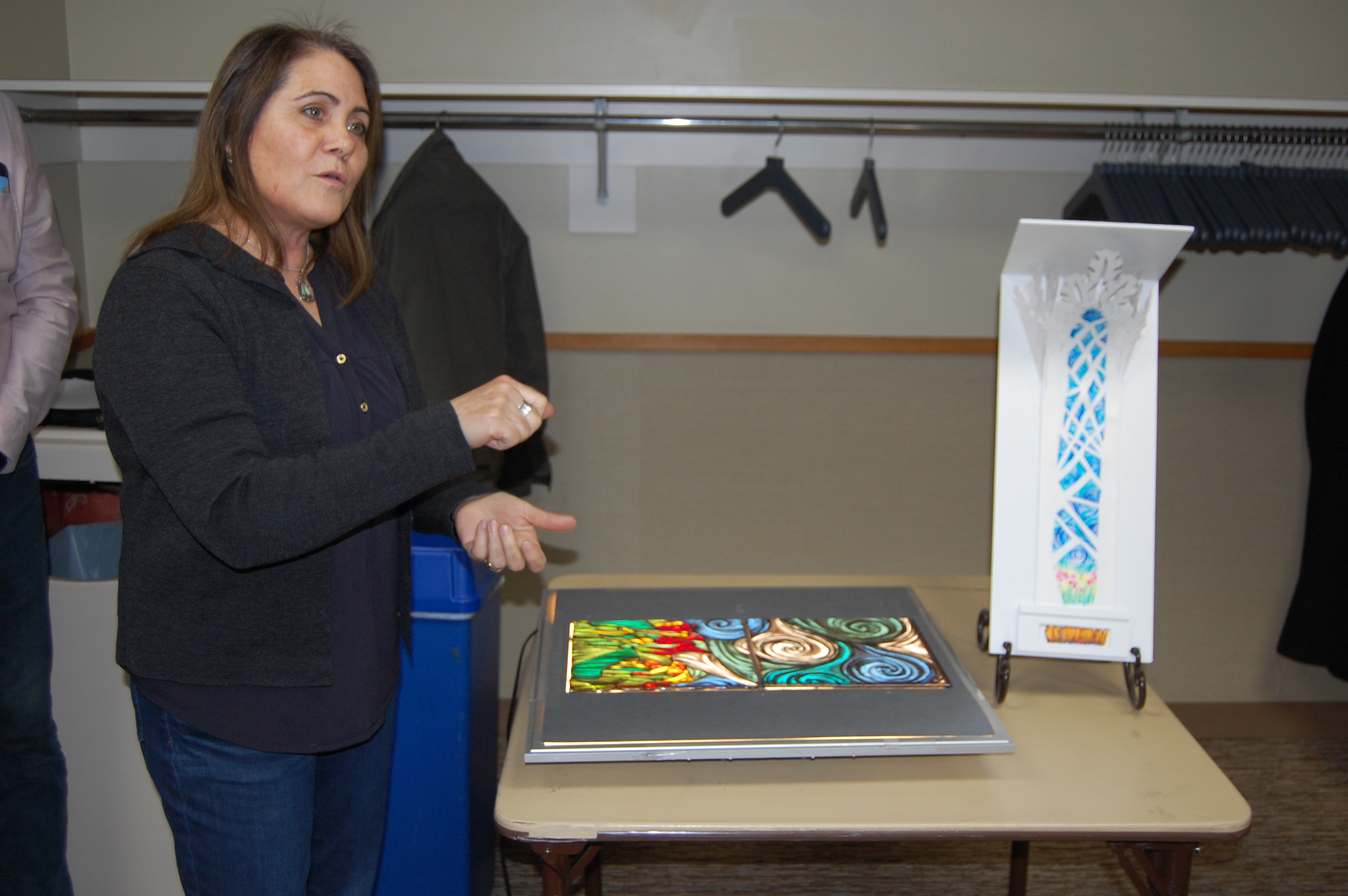 Glenview-based artist Elisa Boughner shows a mock up and plates of stained fused glass of a towering 32 foot tall, six-foot wide illuminated sculpture, commissioned by park board commissioners Thursday, paid for by the Glenview Park Foundation, which will be set in the lobby of the renovated Glenview Ice Center, currently under construction, at a Glenview Park Board meeting Thursday. (Tom Robb/Journal photo)

Glenview Park Board commissioners awarded an agreement Thursday not to exceed $178,887 with Glenview-based artist Elisa Boughner for the production and installation of a sculpture to be placed in the lobby of the renovated Glenview Ice Center.

The 32-foot-tall, six-foot-wide towering sculpture of metal and fused stained glass, would use the fireplace in the lobby of the renovated ice center as its base, running up to and cresting into the ceiling. The glass windows of the ice center lobby would allow the LED-backlit sculpture to be visible from the road.

The contract with Boughner is through her studio, Artifex Studio, which is located on Lehigh Avenue in Glenview.

“The vision for this sculpture came from Elisa’s childhood, growing up in Glenview and ice skating outdoors at Cunliff Park in the wintertime. The feeling of freedom and solace under an open night sky with the tree canopy above is the main focus of the design. The tree sculpture will be constructed of aluminum, multi-colored glass, with LED lighting to back-light the fused glass,” park district documents on the agreement said.

The proposed sculpture would be paid for entirely by Glenview Park Foundation funds and would not use taxpayer dollars.

“We at the Glenview Park Foundation are very fortunate to have been able to support many projects in the Glenview community for nearly 25 years. The successful partnership forged with Glenview artist Elisa Boughner led us to the monumental project to be undertaken at the Glenview Community Ice Center. We are extremely proud to contribute to this transformational new facility in a way that acknowledges not only the civic pride of our residents, but also the joyful innocence of activities that were once born in our neighborhood parks,” Jeff Thoelecke, past Glenview Park Foundation president, said.

“Elisa R. Boughner was born in the United States, raised in Mexico and studied art in America and Europe,” her biography states. “Her work reflects the influence of each of these cultures, and of a range of painting styles from the Impressionists, through the German Expressionists, and finally the Cubist. The result is a unique and highly personal style that brings extraordinary vibrance to often-ordinary subjects.”

Besides her own Artifex Studio, Boughner’s work has been displayed  in the Glenview Park Center, at the Synnestvedt Arboretum in Glenview’s Flick Park, at the Amdur Gallery, at an exhibit at the Scott Foresman offices, at Studio 34, and at Glenview State Bank. She has also exhibited outside Glenview at Chicago’s Field Museum, the Ormond Art Museum in Ormond Beach, FL, University of Michigan in Ann Arbor, Art Center Highland Park, Montgomery Ward Gallery at the University of Illinois Chicago, South Shore Arts in Chicago, Mary Vincent Gallery in LaGrange, Dittmar Gallery in Evanston and Northview Bank & Trust in Northfield, among others.

Letter: Rise up, Dorrigo, and speak on the sculpture

Speak your truth inside the Truth Booth, an inflatable, globe-trotting sculpture...