A hush has fallen over the Albright-Knox Art Gallery’s darkened sculpture court, where the only sounds to be heard are the soft clank of marble floor tiles and the hiss of fog machines dispensing puffs of vapor into the air.

Like a cathedral, the grand space makes visitors feel small.

Unlike a cathedral, the object of worship is not displayed on some ornate altarpiece, but streamed from a pair of high-powered digital projectors mounted to the 30-foot ceiling.

The blinding shafts of light create diaphanous curtains whose edges are made visible by the mist in the room. As visitors approach the projections, they instinctively reach out a hand to see what happens when their fingers penetrate the wall of digital light. Nothing happens, of course. At least not outwardly.

But inside their brains, some buried curiosity awakens. They begin to play strange, childlike games with the projections, testing how life might be different on one side of the light or the other. They stare into the projectors until the light hurts their eyes, then look away, then stare again.

Inevitably, they fish phones out of pockets – because is it even art if you can’t Instagram it? – and become unwitting documentarians of structuralist cinema.

It’s a neat trick, courtesy of the church of Anthony McCall, a British-born artist who creates immersive sculptures and line drawings using the tools of 21st century cinema and theater. The artist’s first American museum exhibition has transformed the gallery’s entire 1905 building into a meditation on the nature of light and line, on view until the entire museum closes Nov. 4 for a two-year construction period. 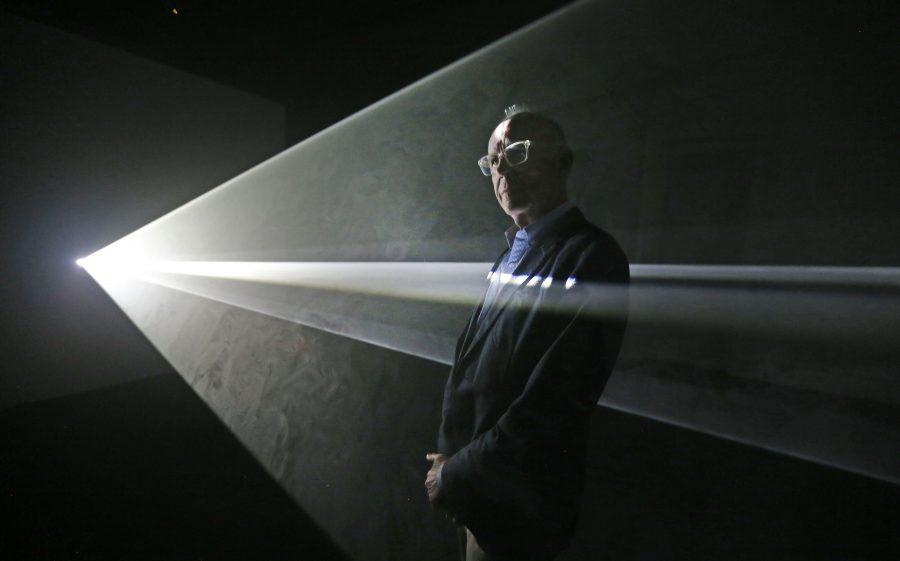 Anthony McCall is having his first American museum exhibition, which occupies the entire 1905 building in the Albright-Knox Art Gallery. (Robert Kirkham/Buffalo News)

After finishing art school, McCall began his career in the 1970s as a performance artist, creating performances in woodland areas involving intricate choreography and smoldering fires. Gradually he shifted to making films to document his performance work and eventually began to create pure pieces of cinema that referred only to themselves.

His early film work was inspired by the experiments of early structuralist filmmakers like Michael Snow and former University at Buffalo professors Tony Conrad and Hollis Frampton, whose work was a major feature and outgrowth of Buffalo’s vaunted avant garde art scene in the ’60s and ’70s.

Once McCall gained some notoriety for his early film work (especially his 1973 film “Line Describing a Cone,” purposely left out of this exhibition), he began showing in white-walled museums and galleries.

There was just one tiny problem.

“I discovered when I did that that for some reason in those institutions, my film was invisible,” he said in an interview in the Albright-Knox café. “You saw the image on the wall, but you saw nothing in between. I discovered at that moment that my medium, unknown to me, had been dust.”

The lofts where he had been showing his work were invariably dusty, and usually filled with cigarette smoke from the few assembled artists who had gathered to see his work.

“You showed the same thing in a brand new Kunsthalle and there was no dust, no smoking, nothing, and you couldn’t see the film.”

Discouraged by the lack of suitable exhibition spaces and opportunities, McCall stopped making art for 20 years, falling back on his graphic design background to pursue a successful career as a designer of art books. He reemerged in the early 2000s, encouraged by museums’ newfound appreciation for the moving image and the invention of the mist machine. 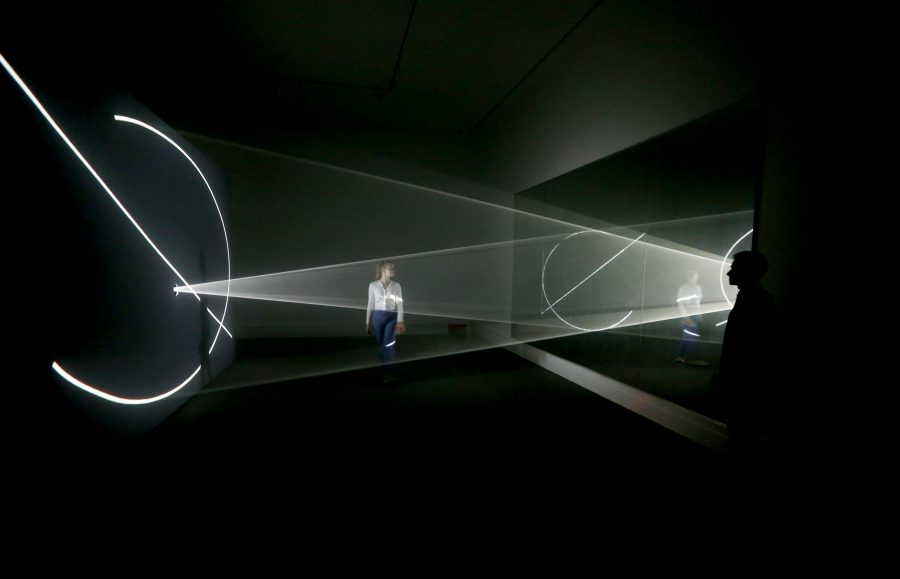 Lost in the complexity of light and shadows, Buffalo State College student Lucia Bartolomei, left, and Joseph Wocniak of Niagara Falls explore one of the projected pieces featured in the light installation by the British artist Anthony McCall. (Robert Kirkham/Buffalo News)

The Albright-Knox is only the latest.

“There’s a thrill that you get when you kind of pierce it,” said Albright-Knox Public Art Curator Aaron Ott, who co-organized this exhibition with Chief Curator Cathleen Chaffee. “I always love watching other people interact with it because you get to see that moment that they cross the threshold, and you get to see them learn, interact and draw other people in.”

That’s precisely what happens when visitors approach a piece like “Between You and I,” the 2006 work that illuminates the gallery’s sculpture court. They are also particularly drawn to “Split Second (Mirror),” a 2018 piece featuring a drawing projected onto a mirror and then back onto a white screen from which the projector’s beam emerges.

Because of the projections’ subtle movement and long duration – anywhere from 15 to 50 minutes – visitors tend to linger much longer than they might if the artwork in question was a Vermeer or a Picasso.

“Just reporting what other people say, they’re intensely pleasurable. Visitors find often that they stay for much longer than they were expecting,” McCall said. “Which is quite the opposite of the cliché structuralist film, which is designed to clear the auditorium quickly.”

It can’t be overstated how appropriate this exhibition is to Buffalo’s place in the story of 20th and 21st century art. As a bastion for experimentation in the media arts in the 1960s and ’70s, Buffalo has gained a worldwide reputation as an incubator for important artistic movements that emerged late in the last century, among them structuralist film and the so-called “Pictures Generation.”

As brilliant and seminal as much of that work was, it was not widely appreciated. Because of its sometimes complicated theoretical underpinnings and the demands it made on audience members, it tended to draw small crowds of initiates. Even now, it commands the respect of the enlightened few who have read the right books and attended the right gatherings.

McCall’s work, by contrast, puts the structures of cinema on display in a manner that appeals as much to the intellectual enamored with the avant garde experiments of the ‘60s as to the neophyte drawn to the gallery because of their friends’ moody Instagram selfies.

With rooms featuring documents of McCall’s earlier performance work and his sketches for projections and other proposed projects, it’s easy to trace the artist’s attempts to move structural cinema from secrecy to spectacle.

“It totally breaks your conception of what art is and transforms the viewing experience,” said Juan Carlos Bertorelli, who made the trip from Toronto with his family just to see McCall’s exhibition. “I could stay for hours and hours.”

He’s not the only one. And for anyone looking to experience the visual, visceral and intellectual pleasures this exhibition provides, those hours are ticking down fast.

Braving MoMA: What to Know Before You Enter

In the News
According to the Times, Visbal said she has been commissioned to create Fearless Girl sculptures in London, Oslo, and Stevensville, Maryland, in addition...