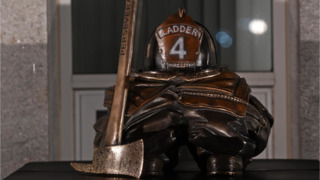 Dignitaries, fellow firefighters and family members stood for an hour in the cold rain to honor firefighter Christopher J. Roy of Shrewsbury, 36, who died a year ago, after he was pulled from a burning apartment at 7 Lowell St.

The bronze sculpture depicts folded turnout gear topped by a helmet for Ladder 4, next to an ax with its blade downward, the word, “Perseverance” engraved on the handle.

After its unveiling, the memorial will be put away over the winter and then permanently sited at the station after landscaping can be done in the spring. 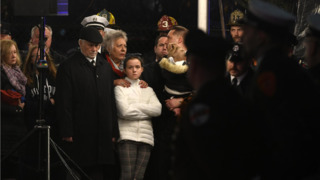 A memorial honoring fallen Worcester, MA, firefighter Christopher Roy was unveiled on Monday at the Webster Square Fire Station as his daughter, Ava, looks on.Telegram & Gazette Staff | Christine Peterson]Support for the sculpture and perpetual care and maintenance of the city’s other firefighter memorials was provided through a $20,000 donation from the Kraft Family Foundation to the Greater Worcester Community Foundation, to establish the Worcester Fire Department Memorials Care Fund.

The fund also received a “generous” donation from the Leary Firefighters Foundation, according to officials.

Roy had worked for Worcester Fire Department for two-and-a-half-years, assigned to Ladder 4 at the Webster Square station.

The first anniversary of his death came on the heels of remembrances for Firefighter Jon D. Davies, 43, who died in a burning three-decker on Arlington St. on Dec. 8, 2011, and the historic Dec. 3, 1999 Worcester Cold Storage and Warehouse Co. fire that claimed the lives of six firefighters: Lt. Thomas Spencer, 42, of Worcester; Lt. James Lyons, 34, of Worcester; and firefighters Paul Brotherton, 41, of Auburn; Timothy Jackson, 51, of Hopedale; Jeremiah Lucey, 38, of Leicester; and Joseph McGuirk, 38, of Worcester.

Memorials honoring the Worcester 6 and Davies stand at the Franklin Street Fire Station.

Besides these grim remembrances, the city is still mourning the loss of fire Lt. Jason Menard, 39, who died Nov. 13 battling a fire in a three-family home at 7 Stockholm St.

“We in Worcester know that for us, December is the cruelest month,” Mayor Joseph M. Petty told the crowd.

He said what should be a time of joy has become a time of remembering. But while the tragedies “shook our city to the core,” he continued, “Though we are bent, we are not broken.”

Petty said, “We are here, we are resilient, we are Worcester and we remember.”

Lt. Gov. Karyn Polito said, “December has a different meaning for us here in Worcester.”

She thanked Kraft for comforting the community and supporting the memorial for Roy and other firefighters.

“This is a job that saves lives,” Polito said.

“The community has shown its true resiliency and compassion,” amidst the firefighter tragedies, said City Manager Edward M. Augustus Jr.

Augustus hoped the Roy memorial “will become a sacred space for his family and for all our families to reflect on service.”

Kraft offered his thanks to police and firefighters for protecting “our way of life.”

“We understand the risk you take to make our lives better,” he said. “Don’t think we take it for granted.”

Fire Chief Michael Lavoie remarked that the word “Perseverance” in the sculpture was a key to what Roy’s life could teach us: “Persevere in the face of tragedy and simply be a good person.”

Before the ceremony’s conclusion, with the tolling of the last alarm bell for Roy and firing of a 21-gun salute, Chief Lavoie said, “Chris, We love you, we miss you and we’ll never forget you.”

Among the brotherhood of firefighters and their families who came to honor Roy, Hunter Collier, 6, of Rutland came dressed in full turnout gear with “Worcester” and “Collier” emblazoned on his back. He stood solemnly, saluting with the detail of professional firefighters.

Lauren Collier, Hunter’s mother, said her son has gotten pint-sized turnout gear every year since he was 2. “He doesn’t take it off,” she said.

Hunter enthusiastically confirmed he wanted to follow in his father’s firefighting footsteps.

In the News
Mark Busch/Shaw MediaCaptionDennis Barsema, chairman of Northern Illinois University's Board of Trustees and NIU alum finishes his remarks with a "Go Huskies" Thursday...