Sculptor News
Home In the News Minneapolis to spend $772,000 on sculpture for new Public Service Building 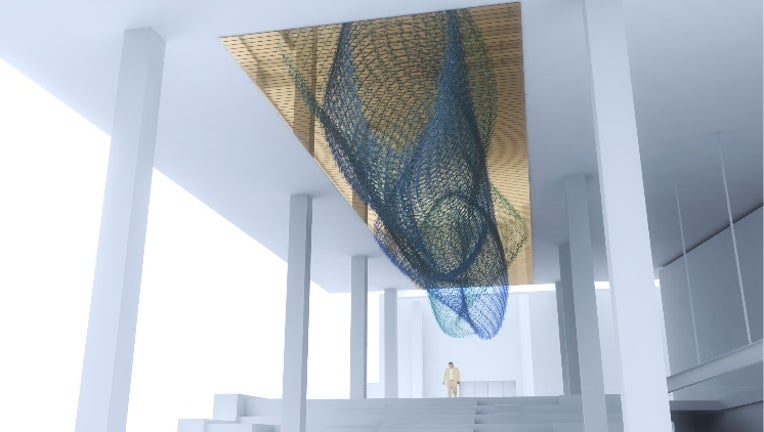 A rendering of the sculpture, which will cost more than $700,000, that will be placed inside the new Public Service Building. ( City of Minneapolis )

MINNEAPOLIS (FOX 9) – The City of Minneapolis is spending hundreds of thousands of dollars on a hanging sculpture for its new downtown Public Service Building, leading critics to question the city’s priorities.

Without any discussion, the Minneapolis City Council on Friday unanimously approved spending $772,107 on the project, including the sculpture and related costs. Atlanta-based Formations Studio is building the sculpture, which is being designed to move with the changing weather conditions.

The sculpture is one of 16 artworks planned for the new Service Building, which is scheduled to open in fall 2020 and will allow the city to consolidate thousands of employees from six other buildings under one roof.

“I thought it was a big fish net, that’s what I thought it was,” Joe Tamburino, chairman of the Downtown Minneapolis Neighborhood Association, said when shown a photo of the sculpture. “I couldn’t believe it’s going to cost $772,000.”

Tamburino is among the downtown residents, business owners and Minneapolis professional sports teams who are calling on city officials to spend more money on policing downtown.

Of the total project cost, $394,517 will pay for the sculpture itself, while $377,590 will be spent on related ceiling, electrical and programmable lighting work.

The sculpture will be a civic centerpiece in the two-story atrium at the new Service Building, said city arts administrator Mary Altman.

In January, the city council and Mayor Jacob Frey allocated an additional $85,000 on a prototype. Altman and a second city staffer recently went to Atlanta to see the mock-up version for themselves, before the council OK’d the full project.

City staff have described the sculpture to council members as a “mesmerizing visual effect” that will be like “a rippling lake or a flock of birds.” It will have a motor and be suspended from the ceiling.

A city ordinance requires 1.5 percent of capital projects — such as buildings, streets, or parks — to be spent on public art, Altman said. The Service Building’s public art budget totals $2 million.

Fourteen of the building’s 16 artworks will be made locally. The city opened up a national competition for the sculpture project and got 48 applications before choosing Formations Studio in Atlanta.

“It’s a pretty complicated piece and we wanted a 75-year piece,” Altman said. “And so we really wanted to make sure that we got an extremely experienced artist.”

The Service Building project is happening at the same time Tamburino and others are lobbying for more police officers to patrol downtown. Frey has proposed hiring 14 officers, and the planned December council vote could be close.

In the News
Structures like sand traps and bunkers may soon be replaced by sculptures at the former Donovan Golf Course.  The Peoria Park District...