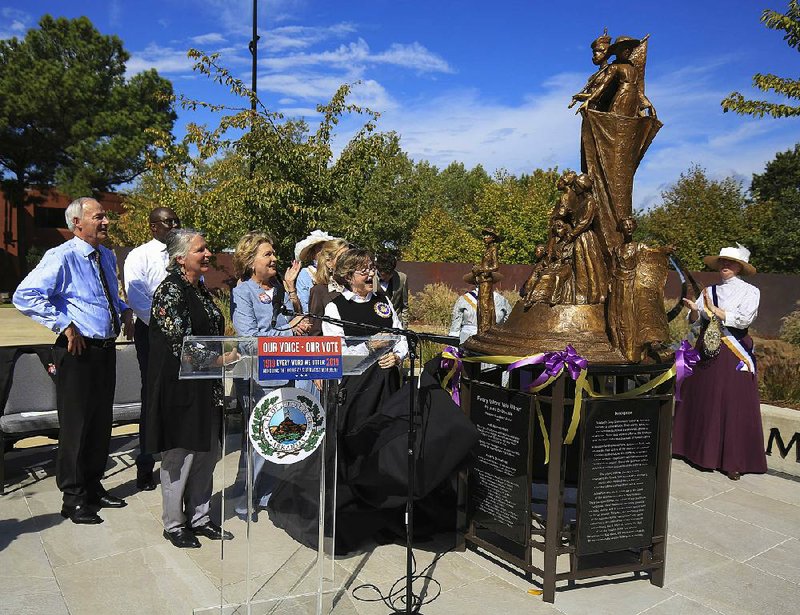 Key figures in the women’s suffrage movement were immortalized in bronze on Thursday at Riverfront Park in Little Rock, 100 years and a few months after women were granted the right to vote in Arkansas.

Susan B. Anthony, Elizabeth Cady Stanton with her daughter, Harriet Stanton Blatch, and Sojourner Truth stand on a platform of bronze ripples that was unveiled at the Vogel Schwartz Sculpture Garden. At the top of the sculpture are Alice Paul and Ida B. Wells, who represent the following generations who rose out of the initial suffragists’ efforts.

The piece is titled “Every Word We Utter,” a quote from an 1880 letter from Stanton to Lucretia Mott, and sculptor Jane DeDecker said the design was inspired by the motion of a water droplet falling into a body of water.

That represents the impact of the suffragists’ work, said DeDecker, a Colorado artist who has more than a dozen pieces placed throughout Little Rock.

Gov. Asa Hutchinson said during the event unveiling the sculpture that he loved the name.

“It is a reminder of our responsibility, that words make a difference,” said Hutchinson, who created the state’s Women’s Suffrage Centennial Commemoration Committee in 2017.

Arkansas became the 12th state to ratify the 19th Amendment in 1919 after decades of efforts by suffragists.

At-large City Director Dean Kumpuris, founder of Sculpture at the River Market, said the nonprofit took up an effort to memorialize women’s suffrage several months ago, when the state didn’t have sufficient funding.

“I just think it’s an event that should be marked,” Kumpuris said.

A curved stone wall that borders the plaza bears plaques with the names of donors and Arkansas women they wanted to memorialize.

One of the names is Mary Lucretia Dudley Spargo, who was president of a suffragist group in Hot Springs in the early 1900s.

Four of her descendants attended Thursday’s unveiling clad in white, the color historically associated with the movement.

One of them, Megan DeLamar Schroeder of Texarkana, said she had heard a few stories about Spargo growing up, but not many, and upon doing some research she was proud to discover her impact.

Along with her mother and cousins, Schroeder said it was inspiring to see Spargo honored and that the women in her family have continued to be committed to social justice issues. 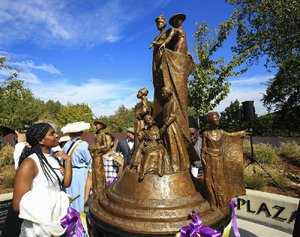 Photo by Staton Breidenthal
Nina Millender, 16, checks out the sculpture titled Every Word We Utter that was unveiled Thursday at the Vogel Schwartz Sculpture Garden in Riverfront Park. More photos at arkansasonline.com/1011sculpture/.

Crews prepare for sculpture made in response to Confederate monuments to be placed at...

In the News
People gather around the sculpture "Bouquet of Tulips" near the Petit Palais in Paris, France, Oct. 7, 2019. American artist Jeff Koons...

Three lions on a beach: a sculpture for the age of...