The sculpture, comprised of the letters N-I-U in 6-foot-tall block type painted in the university’s signature cardinal red, sits in the center of the Martin Luther King Jr. Memorial Commons on the university’s DeKalb campus. It provided an instant pop of color to the commons as the Barsemas drew back the tarp covering the letters, drawing cheers from the more than 150 people who gathered for the event.

“This sculpture, with its bold, classic lines, speaks loudly and proudly about what it means to be an NIU Huskie,” President Freeman said. “It speaks to the legacy of our alumni and the spirit of our student body. We are truly grateful to Dennis and Stacey for this gift. It not only demonstrates their pride in NIU, but also creates a new opportunity for all of us to share our Huskie Pride with the world.”

Sharing that pride was one of the primary goals of creating the piece, which includes a concrete pad emblazoned with “#HuskiePride,” a hashtag that the Barsemas hope will be used as generations of Huskies share on social media photos taken near the sculpture.

“Dennis and I hope that it becomes the most photographed spot on campus. We would be thrilled if it becomes not just a landmark, but also a touchstone,” Stacey Barsema said. “A spot where students pose during their orientation visit, on their graduation day and maybe even when they return to campus with children of their own.”

If history is any guide, the Barsemas might get their wish. The sculpture was the brainchild of Mariano Spizzirri, a manager in NIU’s Marketing and Creative Services. He created an early prototype of the statue from corrugated plastic two years ago, and within 20 minutes of placing it outside of his office, students were posing near it.

The same thing happened Thursday. Remarks dedicating the sculpture were barely completed before students, faculty and staff jockeyed for opportunities to pose with the Barsemas and President Freeman in front of the sculpture. NIU mascots Mission, Mission II and Victor E. Huskie were also popular photo buddies. 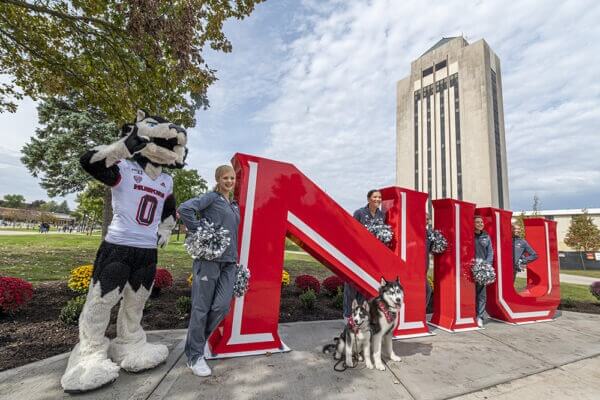 The sculpture, which measures 6-feet high, by 19-feet wide and 12-inches deep, was created using steel-reinforced expanded polystyrene foam coated in an epoxy and then painted using automotive paint to ensure a long-lasting finish. It was fabricated by Expo Design of Indianapolis, which specializes in crafting custom sculptures for events, exhibits and environments. Expo’s work includes sculptures at universities across the country, including many at Big 10 schools, such as Iowa, Purdue, Indiana and Illinois.

The Barsemas have generously supported NIU for more than two decades. They were the lead donors for Barsema Hall, home to the NIU College of Business; the Barsema Alumni and Visitors Center; several scholarships and the Hall of Champions in the Chessick Center. Both of the Barsemas are active on campus, with Stacey siting on the NIU Foundation Board of Directors while Dennis serves as chair of the NIU Board of Trustees.

The sculpture was introduced to campus just as the NIU completes work on an overhaul of the southern portion of the MLK commons. That work will transform the area nearest to the Holmes Student Center into a beautifully landscaped patio leading up to a new grade-level entrance to the building. Inside that entrance awaits a completely revamped ground floor, which will feature three new restaurants, a new convenience store, a new bookstore, new meeting spaces for student organizations and performance spaces for student groups. The patio area and most of the interior spaces are scheduled to open to the public Saturday, Oct. 26, during Homecoming.

In pictures: Annual Sculpture by the Sea art exhibition in Sydney – Gulf News

Decision on sculpture on hold