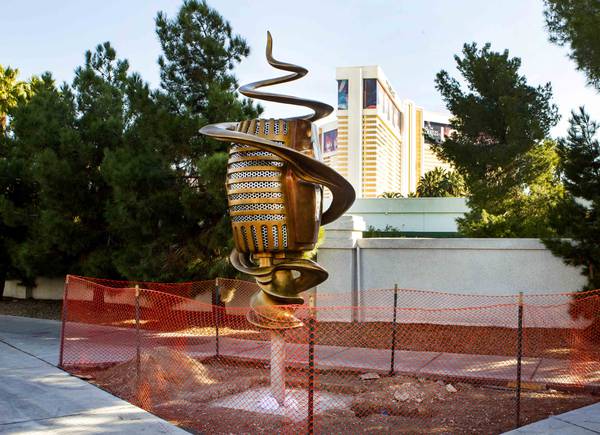 A new sculpture behind the Strip pays tribute to old Las Vegas and the entertainers who helped put Las Vegas on the map.

The stainless steel vintage microphone enveloped in a smoke-like swirl evokes imagery of the Las Vegas lounges and clubs from the 1950s and 60s.

One of the steel smoke plumes angled at the top of the microphone is meant to look like a tipped fedora, Littlejohn said.

“It’s a nod to Humphery Bogart, the original leader of the Rat Pack,” he said.

The $200,000 project is part of the Clark County Arts Plan and was funded through hotel room and ad valorem taxes.

Littlejohn said he plans to install lights in the sculpture that will illuminate as cars drive by at night to represent the way the Rat Pack would gallivant along the Strip until the sun came up.

The sculpture’s location — at the intersection of Frank Sinatra, Dean Martin and Sammy Davis Jr. drives — was important to Littlejohn, who considers himself a “site-specific artist.”

Clark County Commissioner Tick Segerblom said some 20,000 vehicles a day pass the site and “that will continue to grow with tourism and the opening of Allegiant Stadium and properties such as Resorts World.” He said the sculpture further grows “a collection of locally created, world-class art in Las Vegas.”

“We’ve always been the type of place where every 10 years we change,” Segerblom said. “Now I think we’ve arrived in a place culturally where we can start to respect where we are and focus on the benefits local artists bring to us.”

Minneapolis to spend $772,000 on sculpture for new Public Service Building

In the News
STOUGHTON, MA — We had our first snow of the season, and there's likely to...

‘Moon Rock’ Sculpture Could Be Added To Sacramento Convention Center –...

An Artist Who Transforms Paintings Into Cosmic Sculptures