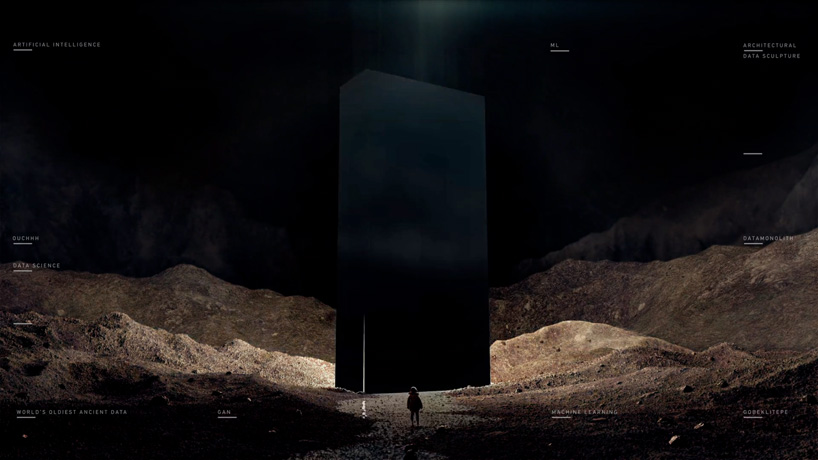 using generative adversarial networks and AI algorithms, ‘DATAMONOLITH_AI’ displays visuals produced by machine learning, which surveys data from göbekli tepe, an archaeological site in the southeastern anatolia region of turkey. dating back to the pre-pottery neolithic period (9600–7000 cal BC), it takes images collected from the site and translates them into data sculptures in the form of graphic visuals that illuminate the otherwise dark obelisk.

‘encompassing both the euphrates and tigris rivers, the area gave birth to the first cities, states, bureaucracy and written communication in history,’ explains ferdi slici, director and founder of ouchhh. ‘in other words, civilization originated in the fertile crescent. göbeklitepe is not only a masterpiece that demanded enormous organization and imagination, and arguably the oldest temple in the world, it is the progenitor of the development of civilization in the world.’ 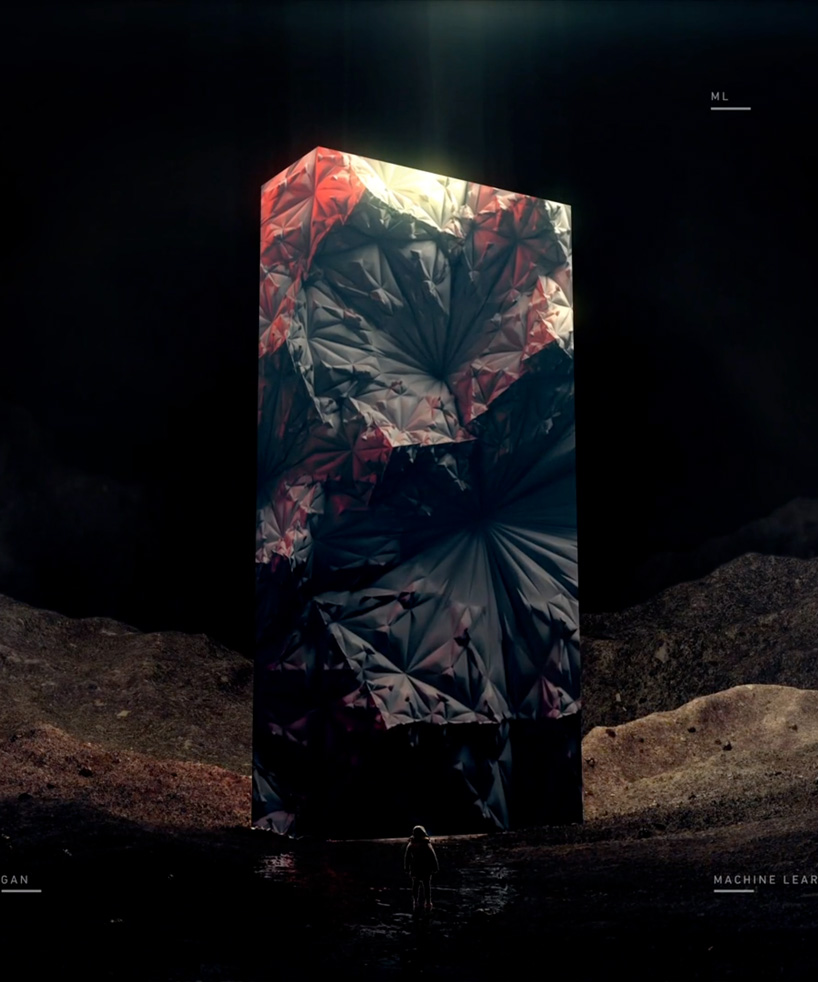 ‘göbeklitepe is, in many ways, the epicenter of history. to date, the excavations at the göbeklitepe have been extraordinarily productive. artifacts unearthed there are paving the way to fresh, unexpected discoveries. the temples far surpass the architectural skill that would have been expected in an era of hunters and gatherers. as such, the excavations have created a sensation around the world.’

‘the temples, adorned with animist figurines reflecting the religious faith of prehistoric people, have made göbeklitepe one of the most significant archaeological discoveries of recent times. impressive as this may be, the site is also important for the scientific conclusions that can be drawn from the plethora of findings on diet, technology, and society. without a doubt, these excavations are crucial for our understanding of human prehistory.’

the 360-degree installation is a good example of a resizable AI data sculpture. currently on display at the mori art museum in tokyo, the piece has been recreated using a series of projections that display images onto a three-dimensional block. ouchhh will also exhibit a 54-foot version of the sculpture using LED screens in las vegas during intersect festival, which runs from the 6th of december until the 7th. 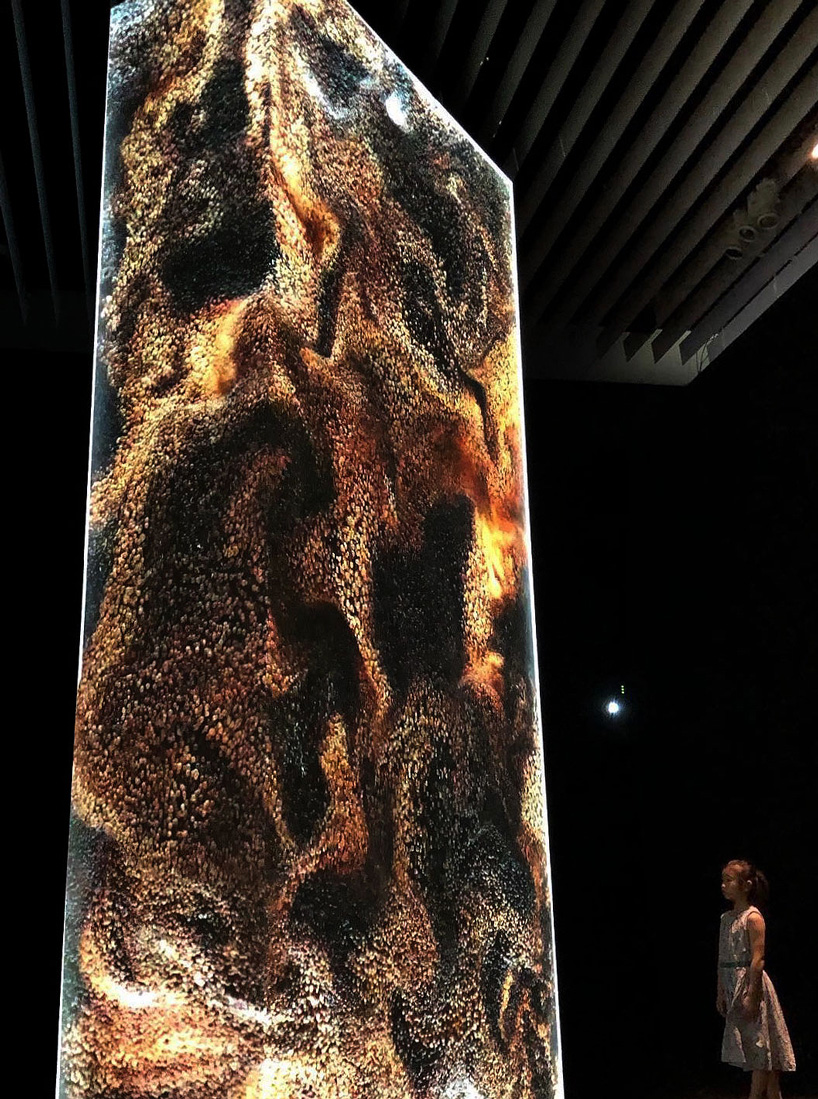 DATAMONOLITH_AI exhibited at the mori art museum in tokyo

‘until recently, it was thought that monumental structures of this size were only possible given more advanced stages of human settlement. göbeklitepe has undermined this view. in fact, it shows that there existed at that time an extremely complex social order and technology. it makes one wonder just how much more is waiting to be discovered… approximately 7,000 years older than the UK’s stonehenge.’

‘our main question is: what would happen if the consciousness of the world’s oldest ancient origins data and AI come together for hybrid architectural public art?’, slici adds. ‘we are not a data visualization studio — we are using data and AI for art. we tried to create a dark cinematic epic experience for possible future life.’ 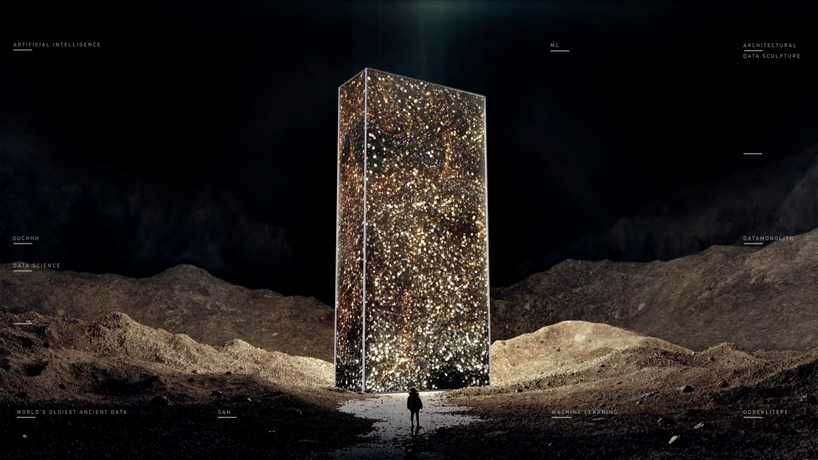 the piece is on display as part of the ‘future and the arts: AI, robotics, cities, life – how humanity will live tomorrow‘ exhibition at mori museum in tokyo. the show explores advances made in technology over the past few years that are now starting to have a significant impact on various aspects of our lives.

the exhibition consists of five sections including ‘new possibilities of cities’, ‘toward neo-metabolism architecture’, ‘lifestyle and design innovations’, ‘human augmentation and its ethical issues,’ and ‘society and humans in transformation.’ it showcases over 100 projects/works that encourage viewers to contemplate cities, environmental issues, human lifestyles and the likely state of human beings as well as human society.

Guy who creates sculptures out of mashed potatoes recreated Tesla’s Cybertruck at his family’s...

Mighty Clydesdale to be honoured with ‘magnificent’ sculpture

In the News
The birthplace of the Clydesdale is hoping to honour its relationship with the breed by erecting a “magnificent” horse sculpture. The Lanark Community Development...

SC School for the Deaf and Blind students help dedicate ‘I...

These twins craft whimsical, approachable sculpture. Their work is now in...