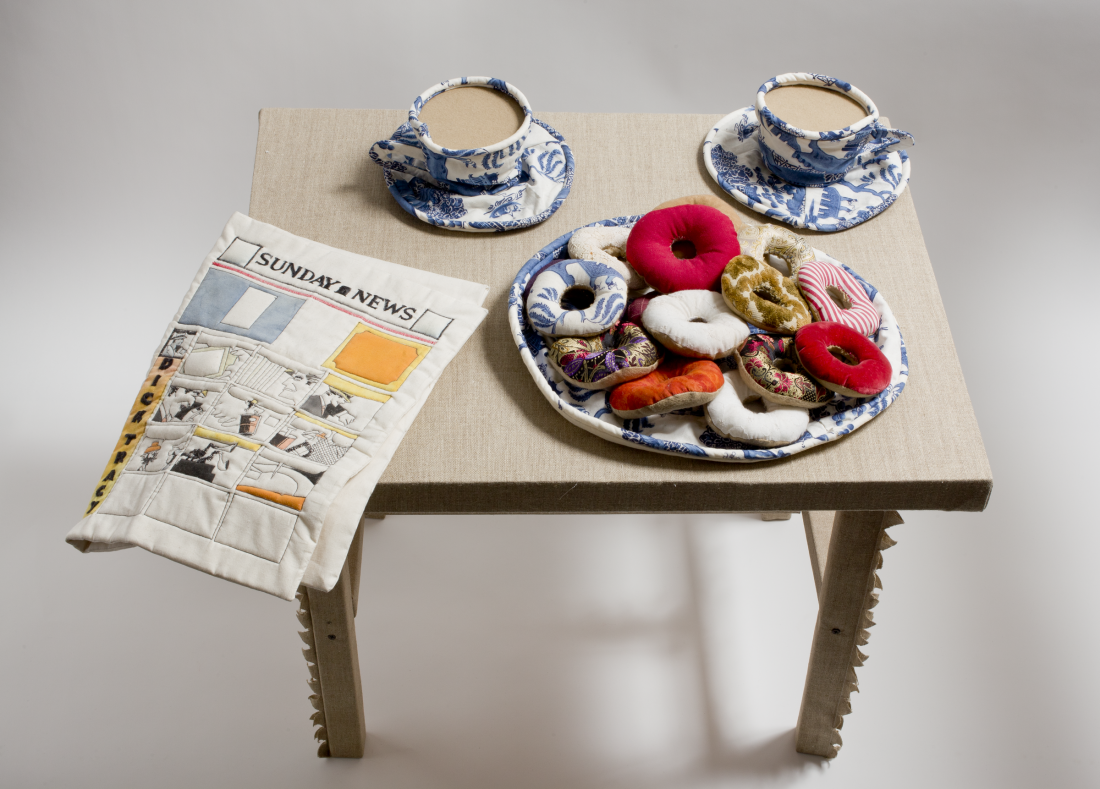 If you’re a fan of American Pop artist Jann Haworth, then an upcoming exhibition at the Pallant House Gallery in Chichester will be your first chance in the UK to see Liberty Blake’s mural, Work in Progress.

The 28-foot piece is the result of a collaborative community project that celebrates women who were catalysts for change in the arts, sciences and social activism. Alongside the mural will be a display of Haworth’s sculptural and wall-based works dating from the 1960s to the present day.

But first, let’s take a closer look at Work in Progress. It evolved from Haworth’s critical re-examination of Sgt Pepper’s Lonely Hearts Club Band album cover that she, in collaboration with her then-husband, Peter Blake, produced in 1967.

Haworth and her daughter Liberty Blake organised a series of workshops with community groups in America where participants created stencil portraits of women selected from across history and areas of influence.

The resulting mural comprises of seven vinyl panels featuring over 100 women spanning over 3,000 years, from the Egyptian pharaoh Nefertiti and Queen Elizabeth I to 21st-century icons including Ellen DeGeneres and Malala Yousafzai. Over the last two years, the mural has travelled to 23 venues across Europe and throughout America. It celebrates the contributions that women have made to culture and social change and raises the question of how these different lives and endeavours have become unjustly marginalised or forgotten throughout history.

Alongside the mural will be a display of Haworth’s wall-based and sculptural artworks. Looking at her early work, it directly challenged the conventional perception of both the form and appropriate subjects for sculpture. The elderly, doughnuts, newspaper comic sections, charm bracelets and cowboys – were all cast in cloth.

This subject matter was informed by her childhood experiences of growing up in California as a daughter of a film production designer. Spending time on sets and filming sessions, Haworth met Hollywood stars including Marlon Brando and Marilyn Monroe and was inspired by the creativity that happened ‘behind-the-scenes’ from special effects to prop and costumes.

Creating life-size and large-scale works, Haworth engages us in a dialogue with her work. Since her student days at the Slade, Haworth’s aim has been to make art that speaks to the broadest of audiences.

The exhibition, Jann Haworth: Close Up, will feature key works including Cowboy (1964), part of Pallant House Gallery’s collection of British pop art, and Old Lady II (1967) which are part of a range of soft sculpture works Haworth created in the 1960s.

She recalls: “What thrilled me about cloth was that in the face of the air of male superiority at the Slade – I knew a whole language of expression that my male colleagues had no inkling of. I knew the language of cloth inside out. I knew how to turn two-dimensional flat fabric into any shape that I needed to create a 3-D object/figure/concept. I knew this opened the door to a vast territory of expression.”

Live updates as Chester welcomes Knife Angel sculpture made from 100,000...