Sculptor News
Home In the News Someone filed a sexual harassment complaint against a City Hall art sculpture... 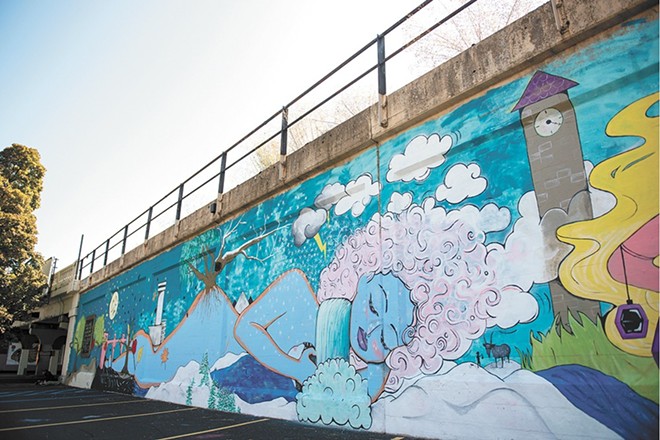 Spokane Arts director Melissa Huggins says that some people seemed concerned that this mural would include a naked woman. Ultimately, it didn’t.

The ceramic sculpture, “Sated,” by University of Montana grad student Stephanie Dishno, features a nude female figure with her mouth open and her hand to her mouth. It was featured in the 2018 All Media Juried Exhibition in the City Hall’s Chase Gallery in October. Anyone who walked into a City Council meeting in early October could see Dishno’s work staring back.

But then someone used the city’s anonymous harassment tip-line to argue the sculpture was inappropriate. “I am offended by this,” the anonymous complainant wrote on Oct. 3, 2018, labeling the primary issue “Sexual Harassment.” “I do not think this is art. I think someone made a stupid decision to put this on display given our current political climate.”

It’s not clear exactly what aspect of the political climate the complainant was referring to, though the complaint came in the midst of the particularly ugly fight over sexual assault allegations against Supreme Court Justice Brett Kavanaugh.

The complainant identified themself as a city employee and said that they were made aware of the art the day before.

And so HR Analyst Lisa Richards, according to city emails, dutifully logged the complaints.


“Good morning,” Richards wrote to other HR staffers. “We just received an anonymous complaint via Ethics Point for sexual harassment. This is in relation to a piece of art in the Chase Gallery. Attached is the case details and pictures.” 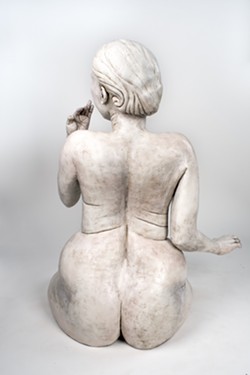 Even turning this sculpture around didn’t stop complaints from being raised about it.

Human Resources contacted Ed Lukas, director of asset management, and Lukas reached out to Spokane Arts, the organization that curates the Chase Gallery.

Melissa Huggins, executive director of Spokane Arts, says she had no idea that someone had filed a sexual harassment complaint about the sculpture — only that someone found it offensive.

“We were told by Ed Lukas that someone had been offended by the sculpture and it was sitting facing the council chambers,” says Huggins. “Our gallery curator offered to turn it around.”

But turning around the sculpture didn’t satisfy some of the anonymous art critics within City Hall. Butts, after all, can offend like breasts can.


“We are still receiving complaints regarding ‘Sated’ in the Chase Gallery, in particular around moving the piece backward with the buttocks visible. Employees still feel it is offensive and inappropriate,” Richards wrote in an email to Lukas and the facilities manager. “Right now, it has not resolved the issue but rather created more concern and frustration from employees around what the City is doing to address the problem.”

Lukas proposed moving it to a different section in the gallery, behind a wall so it couldn’t be seen by passersby.

“I will move it but I am concerned if there will be future complaints even after I do so,” wrote Remelisa Cullitan, the Chase Gallery curator.

But Lukas argued that even if there were, they didn’t have a case to complain.

“Someone going to the chambers would have to purposely seek out ‘Sated’ to be offended — an unreasonable action which is outside of citizen expectations of a public space,” Lukas wrote. Ultimately, the statue remained up last year until the exhibition ended at the end of December.

Right now “Sated” is sitting in artist Stephanie Dishno’s backyard in Montana. Dishno says she had no idea there was any sort of controversy about her work.

Dishno says her work wasn’t intended to rely on shock value — though she’s dabbled with that strategy in the past. But she does say that she intended the work to be somewhat provocative, and to deal directly with issues like sexuality.

“It’s about empowering female sexuality and body positivity,” Dishno says. “I wanted to push back on the male gaze that has existed in art history.”

“This piece is specifically addressing the idea that historically within art and outside of art that the female body was considered obscene and the male body was not seen as obscene,” Huggins says. “She’s trying to push boundaries. Historically, depictions of the female figure have been required to be demure and covered in a way that male figures have not.”

And while a nude female figure has, of course, become a staple of artwork, Dishno argues that they’ve generally been sculpted, painted or photographed in a way that stresses pleasure for the male viewer.

But Dishno wanted to upend that. She didn’t want the figure to seem submissive.

“I chose to make the gaze in the piece confrontational,” Dishno says. “You’re in the direct eye-line.”

She says she tried to push back a bit on what society uses as the ideal female form. And without trying to “spoon feed” the viewer with the interpretation, Dishno says, she did intend to allude to sexual pleasure with the sculpture’s pose and the name “Sated.”

“I see it as an empowering sculpture for women,” Dishno says. “I didn’t make it intending to make anyone feel threatened. I wanted the piece to be more thought-provoking, to lead the viewer to question how the viewer is perceiving the piece or why.” 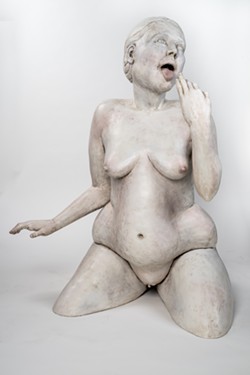 The statue “Sated” sparked a sexual harassment complaint from a city employee.

For her part, Huggins doesn’t believe that the sculpture was inappropriate.

“It sounds to me that this is another case of someone who’s holding the belief that the female body is inherently offensive, that what they’re disturbed by is that this is a sculpture of a nude female body,” Huggins says. “That is the human body. The job of art is to explore the human condition.”

If the sculpture hadn’t been placed in a public space next to City Council chambers, Huggins says, Spokane Arts wouldn’t have felt a need to be responsive to the complaints. After all, art is supposed to provoke an emotional reaction of some sort. Otherwise, she argues, it’s just boring.

“There’s a million factors that go into what art was selected in the gallery,” Huggins says. “Does it fit into the theme? Does it physically fit in the gallery?”

In this case, the artwork was selected by guest curator Mason Miles, who aimed for works that were “fairly monochromatic with splashes of color here and there.”

But one key factor Huggins uses to distinguish between good art and bad: Is it interesting? Does it provoke some sort of emotional reaction in the viewer?

Still, Dishno says she understands the decision to move the sculpture out of eyesight.

“I respect that the gallery needed to move the piece so that it was less offensive to viewers walking by so if people didn’t want to see it, they didn’t have to,” Dishno says.

After all, when she puts up nude sculptures at the University of Montana, she takes similar precautions, not wanting to surprise people for whom such sculptures could unleash a flood of painful memories.

“When I’m showing my figures that contain a naked form on campus, I usually try to keep it out of the doorway so it doesn’t trigger anybody that was to encounter the work,” Dishno says.

On one hand, in 2002, Attorney General John Ashcroft has heavily mocked after his staff covered the bare breast of the “Spirit of Justice” statue in the Great Hall of the Justice Department. On the other, earlier this year, a San Francisco school board voted to paint over a large 83-year-old historic mural because of its portrayal of slaves and American Indians, though ultimately the district decided to cover the mural instead of destroying it.

Conservatives get outraged by art for allegedly being sexually explicit, blasphemous and anti-American, while liberals complain about art by accusing it of sexism, racism or cultural appropriation.

“People’s barometer for what they’re offended by is based on all their personal factors … One thing we worked hard to remind people of is that art is subjective,” Huggins says. “In a piece of artwork, there is not an objective right and wrong interpretation. Everyone has a different aesthetic preference.”

Earlier this year, KHQ assured viewers that there was “no need to worry,” because a 160-foot mural downtown would not be of a nude woman. Huggins argues it’s worth asking — why do so many people consider the image of a nude female body so offensive?

“We hold four shows a year. In 2018 we had over 80 artists displaying multiple pieces of work,” Huggins says. “At least 150 pieces of artwork were displayed in the gallery. Those people’s art has explored politics and religion and gender and everything under the sun, but this is the only one someone complained about? That’s telling.”

Morning Roundup: A Sculpture Of The Last Supper Was Hidden Behind...