Once you notice them, you start seeing them everywhere: trees carved into bears, eagles, even miniature play houses for kids. But how did they get there?

Midvale resident and former City Council member Wayne Sharp began carving the statues more than 15 years ago. A landscaper by trade, Sharp was looking for ways to make money during the winter months. “There was a national pro named Mark Colp from Northern California who came to the State Fair here,” Sharp said. “I watched him and thought I already have a chainsaw and access to wood. I should try this.”

In addition to countless sculptures designed for private homes, at least 10 of Sharp’s creations have occupied public spots in Midvale. The trees needed to come down anyway due to disease or other factors. The sculptures turn a potential eyesore into a fun landmark.

Children are encouraged to play in the tiny houses south of the pavilion at Midvale City Park and sit in the bear chair near the skate park at the Copperview Recreation Center. The playhouse near the rec center was the first one Sharp made. He came up with the idea and wondered if he could make it work. “I haven’t seen anyone else do it,” Sharp said. “One day I would like to do a two-story castle, maybe carve a ladder inside. I just need a big enough tree.”

Sharp’s son, Tyler, also carves the wooden sculptures. During the recent Harvest Days they rode on a trailer and carved tree stumps during the parade.

Some of the pair’s sculptures are created in their shop while some are carved into tree stumps still rooted into the ground. “Most people want me to come to their house, and most people want a bear,” Sharp said. 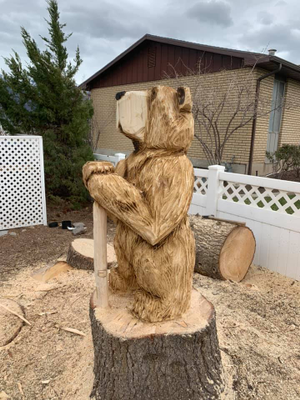 Sharp uses only a chainsaw to carve his creations, plus a sander and sometimes some paint. His newest public creation is a bench at the Midvale City Hall. It was carved from a juniper tree that grew near the old city hall building.

“I need to refurbish the 9-foot Welcome to Midvale bear that used to be near the freeway off-ramp at 7200 South,” Sharp said. “It had to come down for the construction, but I’m so glad they saved it.” Sharp had permission from UDOT at the time to place the bear on the embankment, but new leadership won’t allow it to be put back up. A new location will have to be found.

Sharp also hopes to carve another bear to replace the one he had created at the Jordan River Trail around 7800 South. “The wood started to rot, so I started to fix it,” Sharp said. “But then I came back one day and the whole thing was gone.”

Also missing is a dragon he carved for Midvale Elementary many years ago. Its whereabouts are currently unknown. Midvalley Elementary had its sculpture removed to make way for construction of a new school building. That one, a dog holding a sign saying “Jr Huskies,” is being kept safe inside the existing building for now.

“There’s only one that I know for sure got stolen,” Sharp said. “A little 3-foot standing bear stolen off my dad’s porch in Midvale.”

But more than anything, Sharp’s wooden bears create a sense of community.

“I love it when people watch. I love to see other people enjoy it while it happens. It brings people together,” he said. “When I’ve done 20-foot totem poles or 14-foot owls, I’ll be there a week. Neighbors congregate and watch. Sometimes they live across the street but don’t know each other. People are standing there and start to talk to one another. Otherwise they wouldn’t have communicated.”

When kids are watching, Sharp has them come up and knock on the tree. “Do you hear a bear? No? Come back in an hour.”

This artist makes sculptures that reflect to infinity